Christmas just wouldn’t be Christmas without a flurry of heartfelt TVCs.

2018’s Christmas advertising has followed trends of years’ past, focusing on brand instead of retail.

This year’s international front-runners—which include John Lewis’s Elton John spot, Aldi’s Kevin the Carrot, and Sainsbury’s The Big Night—each focus on brand-building, putting aside P&P messaging in favour of aligning brand values with the feel-good sentiment associated with the holiday season.

John Lewis has impressed once again, with their Elton John-themed advert winning the top spot for mentions and achieving an impressive 94% positive sentiment score from Brandwatch. The ad documents John’s journey from receiving a piano as a child to his later stardom, emphasising that a gift can offer so much more than something to unwrap on Christmas Day. By featuring an incredibly well-known star, the ad centres on a narrative that is immediately accessible, and its emotionally-charged directorial style leaves audiences feeling sentimental and inspired – ultimately positioning Christmas as an opportunity not only to show your love for others, but to help them unlock their potential through the gifts you give.

On launch, John Lewis’ ad prompted a flurry of social engagement from consumers and brands alike. An example of successful reactive social content, UK retailer Lidl’s Twitter response to the advert (which aligned themselves with the sentiment, albeit as a wallet-friendlier alternative) has since received over 26k likes, illustrating the opportunity for brands to capitalise on the talkability of Christmas advertising and appeal to customers outside of TVCs in other innovative (and more cost-effective) ways. 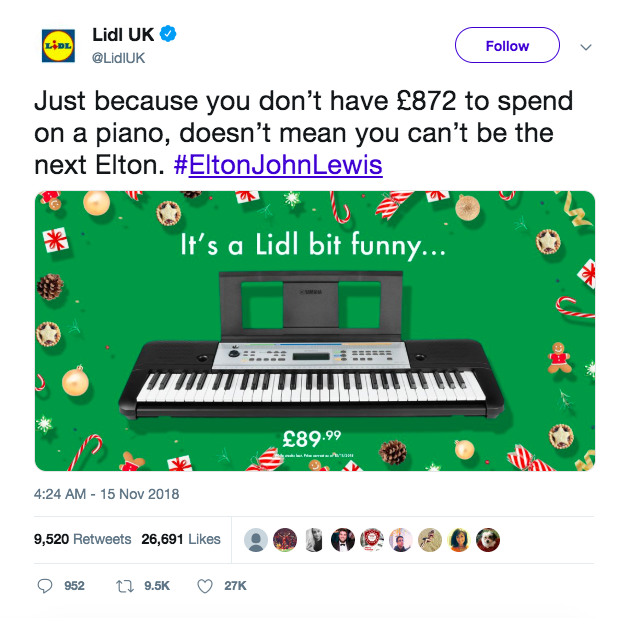 Continuing with this ‘feel-good’ sentiment, though with a demonstrable spin, both Uber and UberEats are volunteering their services to help make people’s lives a little easier over the holidays.

Uber is providing NHS Staff with free travel over the Christmas period, while UberEats and Coca-Cola have joined forces in France to deliver your family’s meal to you for free if you’re working on Christmas Eve. Coca-Cola’s contribution is a little lost in the TVC, but apparently their technology is a crucial part of this partnership (so perhaps the out of focus Coca-Cola bottle printed with “Papa” should’ve been a bit more obvious). Regardless, it’s admirable they’re giving back.

Uber’s been all about the partnerships lately, and have also partnered with LEGO to give free “Uber Toys” ride in life-size LEGO cars in Paris. Though not a Christmas campaign per se, the creativity of this campaign, and its likely appeal to consumers of all ages, will help to give LEGO top-of-mind salience moving into the busy Christmas shopping period.

Offering a vastly different perspective than these other sentimental ads, Iceland supermarket’s emotive spot criticising palm oil harvesting was banned by the UK’s Advertising Standards Agency in early November for being “too political”. However, the ban only accelerated conversation as the Streisand effect took hold, in turn motivating the most social shares of all Christmas ads this year, according to Brandwatch.

Industry leaders have debated on The Drum whether the ad should’ve been allowed to run or not, but one thing is clear: the ban only made the ad more popular, with the video having since received over 30 million views online. While the ad won’t be shown on television, the hype around it has nonetheless elevated this ad into its own category, dominating the conversation this advertising season.

Closer to home, Kiwi brands continue to take a light-hearted tone on the Christmas season with humorous ads.

Spark have adopted a similar narrative in their “Naughty or Nice Report”  campaign, which stars Clarke Gayford as a newsreader with a secret mission to engage Kiwi parents to send updates for Santa about whether their kids have been naughty or nice. Data is fed through to a national forecast, providing an average Nice percentage reading for each region. Once in the app, you can hear dynamic voicemails from Santa based on your updates, and compare Nice ratings of different areas around the country. Spark’s strategy for collecting this data is fun and engaging, and particularly interesting given they’re leveraging the hype around Christmas to do so – we’ll be watching to see how they use this data in future.

Other local brands are reminding us of the importance of family these holidays – Stick Man’s cousin Snowy has come to visit in PAK’nSAVE’s Christmas Meat Week ad, using the quirky humour from PAK’nSAVE that Kiwis know and love.

Within this familial theme, we’ve seen a few Kiwi brands including product mentions in their brand spots, such as Farmers’ Home of Christmas and Warehouse Stationery’s Gifts for Ma. Time will tell how consumers respond to these campaigns, and if this approach will assist with generating sales more effectively than brand-led creative alone.

As the competition for eyeballs and Christmas consumers gets ever-more intense, we’re seeing talkability assisting brands to rise to the top. The likes of John Lewis’ Elton John, Iceland’s palm oil documentary, and Spark’s “Naughty or Nice Report” are inspiring social conversations that are more valuable than media spend, helping these advertisers to sustain their brand salience over this busy period and, inevitably, into 2019.